Telepathic communication with the animals we live with has become much more recognized lately. It’s a trend we’re happy to see. The way I think of it, there have been plenty of psychic pets all along — and now we are seeing more people who are tuned into their pets as well!

My husband Kelly and I have had several cats in our life together, and a while ago we found ourselves in a new home in a rural area — with no cats. I decided that I wanted a Siamese or a part-Siamese, and Kelly agreed that it would be nice to have a cat around again. I did research on the internet; I found a Siamese rescue group: I happily imagined a chatty Siamese lounging on our bed.

And so it was. Moonlight was about eight months old at the time he came to us from a nearby ranch. He was good-natured, cuddly, healthy, part Siamese and basically looking Siamese.

But he was lonely. We have two in-your-face dogs, and Moonlight was afraid to come into my office, where Larry and Sunbeam were usually hanging out with me. The solution? Kelly and I agreed that we would get one of Moonlight’s litter mates, an adventurous little black female who had already been offered to us. And so we did.We named her Midnight Star because of the white star on her chest. Once she came home, Moonlight was much happier. We all were, with the possible exception of one of the dogs, who was jealous.

Soon it was time to bundle the cats up into a carrier, drive them an hour to the vet’s, and leave them there in jail for 24 hours to be spayed and neutered. A large dog was barking incessantly in a cage just below theirs when we left. We sent them love during the long hours they were away, but they were not happy campers when we picked them up the next day. They had learned that the world could be quite unpleasant. 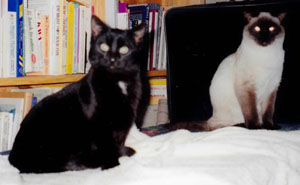 Moonlight soon recovered. Midnight Star didn’t. She wouldn’t eat much; she would barely drink. I tried everything: talked to the veterinary clinic and followed their advice, talked to my friends, hand-fed her droppers of water, with penicillin or Bach flower remedies in them. She got thinner and more listless. She hadn’t purred since coming back from the clinic. She had a fever; then it cleared up but she still didn’t eat. Kelly and I discussed making the trek over the mountains to the vet’s office with her, but they said they’d want to keep her at least overnight if we came, and I wasn’t sure her will to live would survive it.

One night I had a dream, where I was singing the old labor song, “Which side are you on?” Okay… I was on the side of doing what Midnight Star wanted. So I would have to talk with her.

Why hadn’t I thought of that before? It had been almost a week of this travail. Had I forgotten everything I learned when we produced a program, Telepathic Communication with Animals, with our friend Penelope Smith? Both Kelly and I had become more telepathic with our pets as a result of that, but here I had forgotten to try it. Dutifully, I sat down at my computer — I’ve found that writing is the easiest way for me to communicate telepathically. Midnight Star was lounging on the window seat—I could just see her if I peered past my printer. I began writing, asking her what she wanted me to know.

“I want you to remember,” she said immediately.

And just as fast my body flinched.”Do I have to?” I asked. “Can’t we just talk about when you are going to eat?”

“That is not important. Remember.”

Turning my attention inward, I smelled smoke. It was a dark night, and I was outside. As I gradually let the images in, Star kept encouraging me.I felt myself to be a witch, and I was about to be burned at the stake. Star was my familiar and she told me that at the very first moment of feeling the fire, I could use that pain to journey out of my body.

Somehow I knew that she and I had done a lot of journeying, and I trusted her, even as my fear and panic increased. A kind priest came over and begged me to recant and be saved, but I had to be true to my own way of worshipping. I felt sad that he didn’t realize the profundity of my sense of worship, my connection with the Divine.

When the flames did come, Star jumped first, as she had told me she would, and then it was my turn.

I jumped into the Unknown, totally away from the pain, fear, smoke, and fire.

Abruptly my awareness shifted back to my office. As I sat at the computer, a little movement caught the corner of my eye. Star had come over. I picked her up and she settled onto my knees. “Oh Star,” I said. “You saved me, thank you, you saved me.” I was crying as I stroked her gently. She purred.

She soon recovered and she became much more affectionate with me than she was before.

Do I think the scene I experienced with Star literally happened? It might have, it might not have; I did inherit a bit of an imagination from my science fiction writer father. But I’m paying more attention to Star these days when she jumps on my desk and blocks my view of the monitor.

Click here to read another story, this one about the death (and beyond) of our dear old dog Cider. Or here for some tips on communicating telepathically with your pets.