For many years Kelly considered himself a filmmaker above all else. During his early twenties through to his fifties, Kelly either contributed to or produced numerous films and videos. Some of these are mentioned in the other categories on the main menu as they relate to sustainable architecture and animals and are still available for purchase as DVDs. 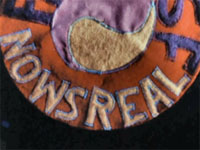 One of his earlier films was a collaborative effort with several folks from the Digger movement in San Francisco in the mid 1960’s. Kelly acted as cameraman and editor on Nowsreal which was conceived mainly by Peter Berg and Peter Coyote. This documentary shows the Diggers from the inside through a series of scenes of their activity that rely on the content of the imagery for explanation, rather than a narration.   You can view Nowsreal in its entirety at www.diggers.org

Kelly’s animation occupied many years and you can find out more about it here. In addition to the experimental Fluid Art animation described there, Kelly worked on various commissioned animation projects.

In 1985 Kelly went to the Soviet Union to produce a documentary video program titled Reflections: the Soviet Union with Hart. Kelly interviewed Soviet citizens about their feelings of promoting peace in the world and he wandered in the streets to capture the ambience of life in the Soviet Union.

Kelly joined a group of four Soviet citizens as they traveled across the United States staying in private homes and connecting with people. Soviets Meet Middle America was the resulting documentary about this experience.

While living in Olympia, Washington, Kelly produced a short video about that city, promoting it as a tourist destination: Exploring Olympia: Washington’s Capital
City.

Kelly collected interview footage with several notable people with the intention of producing a series of programs under the umbrella of Tell-a-Vision. Two programs that emerged from this were The Well of Knowing: Reflections of Danaan Parry and The Edge of the Abyss: Worldwide Prophesies Point to These Times, featuring Louis Jarvis.